Below are a few samples from the category, US News.
To see the full set of articles, you must become a YourStream subscriber. 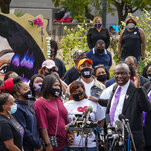 GRAND JURY DELIBERATIONS IN BREONNA TAYLOR CASE WILL BE RELEASED
The Kentucky attorney general's office said it would release the panel's recordings after a grand juror contended in a court filing that its discussions were inaccurately characterized.